I am taking some time to talk about ethical photography and hiking. I have been wanting to write this for a while but just haven’t had time (hence the lack of updates recently). I was spurred on by seeing a post on Instgram. It was a photo of Falling Springs Falls in Virginia. The photographer and climbed down to the bottom of the falls for the shot and it was being shared on various accounts (the main Virginia Tourism site for one). It irked me. It is illegal to hike to the bottom and fines are involved if caught. Do people get caught? Maybe. Probably not. And maybe they don’t care about the fines but there are reasons some areas are closed off. And by sharing those photos, it encourages others to climb to the bottom.

Now, in all honestly, I have passed a few lines that said, “stay back”. I have certainly hiked off trail but usually where allowed. But when signs say, “This is illegal and you will be fined.” I respect that. Maybe I’m a noob but if all photographers ignored those signs there would be trails where there shouldn’t be and vegetation would start to fade away. I believe in ethical photography. That means respecting laws. It means staying your distance away from animals and wildlife. It means not disturbing nature and following Leave No Trace.

Speaking of Leave No Trace… apparently people are now leaving painted golf balls on trails. It started with painted rocks. Now they have progressed to golf balls. This is from the blog “A Fork in the Road” by Jim Fetig.

This is a big no-no. If you see these, please pack them out. This is from the Appalachian Trail of all places. No rocks, no balls, no painted anything should be left on trails. So many places are being destroyed, we need to be ethical hikers as well and not introduce things that aren’t native to where we are hiking. And no, painted rocks are not native. I have packed out more than one of those. If you want to paint rocks and leave them around your neighborhood, that’s fine. I think that is totally different than Shenandoah National Park.

What do you think? Do you practice responsible hiking, Leave No Trace and ethical photography?

Solo Hiking…Running…Walking…Existing as a Woman

This past weekend, as I was talking with my mom and preparing to say good-bye, she said to me, “Jenn, I want to ask you, once more, to please never go hiking alone.”  She has asked me this numerous times. She can’t ever believe that I go out alone. That I leave, early in the morning, arrive and hike Shenandoah National Park (or anywhere) all alone. She can’t fathom that I’m out there for hours and sometimes only see 1-2 other people.  I sometimes don’t tell her I’m going so she doesn’t worry.

This question was asked because of Mollie Tibbets.  My mom heard her story and believed the reason she was targeted was because she was running alone. Mollie wasn’t killed because she was running solo.  A woman does not face violence BECAUSE she is solo.  There have been women killed when together. Sometimes in groups. Often times at parties.  The fact is, men go missing and die while out in nature as well and guess what, I never see, “Hey men! Be careful as you hike solo.”  I haven’t ever seen it up for debate.

I get tired of hearing, “Don’t go alone.”  Well who is going to go with me? My son? That’s been discussed here already. My daughter is too busy. I ask friends and only once out of 20 times will someone try to go with me. So my choice is to never go hiking or to act like a grown up woman and go anyway.  The violence that follows women who are alone has more to do with the men who attack them. I guarantee if you ask your female friends they all have a story about a man who reacted poorly because he was turned down, refused, or ignored. I have more than one. I have been on the receiving end of a hand that ended up across my face, in public, where no one (including my boyfriend at the time) did nothing.

Hiking alone is one of the best things I do in life. I love the solitude. I know I can take as long as I want to take photos. I can take my time or I can hurry. I do all the things I’m supposed to do: let someone know where I’m going, carry a weapon, carry bear spray (more for people than the bear), and carry my SPOT in case I get lost (this has NEVER happened – not even while bushwhacking).  I read a lot of blogs and admire the women who have hiked the PCT, John Muir, or Appalachian Trail solo.  I think it is incredible and I long to do something similar.  I refuse to be scared. I refuse to let worry overtake my life and stop me from doing the things I want to do.  When I used to travel for work, I would go out hiking wherever I was and never had any fear. I have walked the streets of Washington, D.C. at night with no fear. I have sat at the steps of the Lincoln Memorial at 2:00 am with no fear.   It just isn’t going to happen.

Thankfully, I haven’t ever had an issue while on a trail. I am always aware. I look around. I take notice if anyone is around me. I listen. Maybe I’m lucky that I haven’t had any issues.  I walk, hike, carry myself in such a way that shows I’m not intimidated. I’m sure that helps. I look people dead in the eyes as we pass each other on a trail.  Also, I am well versed on where I am so that if I have to take a different trail, I can. Or, I can bushwhack to safety.

That’s a big, bold statement isn’t it?  Let me first start by saying I love dogs. I love animals but I really love dogs and cats.  I wish I had a dog. I had one growing up and I loved that dog with all my heart. I see people out hiking with their dogs and it makes me want to get one or borrow one just for hikes. But allergies and lifestyle don’t allow for one right now.

There are leash laws for many reasons. Nature preserves, public parks, national parks – none of them are dog parks. Yesterday, I got out for a quick hike. I went to a favorite spot and was, thankfully, alone on the trail quite a bit. I go early to this park because it does get crazy busy. As I arrived at the waterfall area I was run up on by various dogs. The majority of the time I didn’t even see their owners. They were just letting the dogs run up ahead so they could jump in the water.  Where do you think they jumped?  You’d be correct if you guessed right next to me. At least once I had to shield my camera on its tripod from two, very large Golden Retrievers. The owners just laughed. Yes, they laughed at the thought that if they had successfully knocked over my camera they would have had to pay me a good $6,000 for all equipment.

Later, as I was on a different part of the trail, a group of about 20 people came and they had 10-12 dogs with them.  None of them were on a leash. Again, the dogs made a beeline for me. I stood my ground, protected my gear, and waited for them to pass. The owners once again just laughed and made jokes.  The park specifically says dogs need to be on a leash. I guess most people feel they are above this and that their dogs are special. I know they think they are special because I hear, “Oh she’s so friendly.” just moments before their dog growls at me.  Or, “He just wants to say hi.” as their dog prepares to jump on me. I’m sorry but your dog isn’t special.

Leash laws are there for a reason. For the protection of others (your dog isn’t always friendly).  For the protection of your dog (some areas are rocky, slippery, or in the case of backcountry – other wild animals). Also, if the dog runs off and poops somewhere the owner may not know this if they can’t even see their dog.  This ruins the park for everyone.

I would encourage everyone to follow the law. Leash your dog. You are making sure your dog is respectful of others – just like you want people to respect your dogs. I almost always say hi to dogs if they are on a leash. I put my hand out for them to smell and pet them if the owner allows.  It is because I love them.  But if it isn’t on a leash, then I have no idea how your dog is going to act because it is out of control.  If you’d like your dog to run wild, find a dog park.  Find a big field where a dog can run. Take your dog for a run. But letting it loose in parks, trails, and nature preserves is not your right.

A Trip to Difficult Run

One of my favorite places to visit is Difficult Run near Great Falls National Park. I know this place gets a lot of visitors but I still think it is one of the hidden gems of our area. Difficult Run cuts through large rock formations and down into a gorge. I have been in the fall, spring, and now winter and it never disappoints. 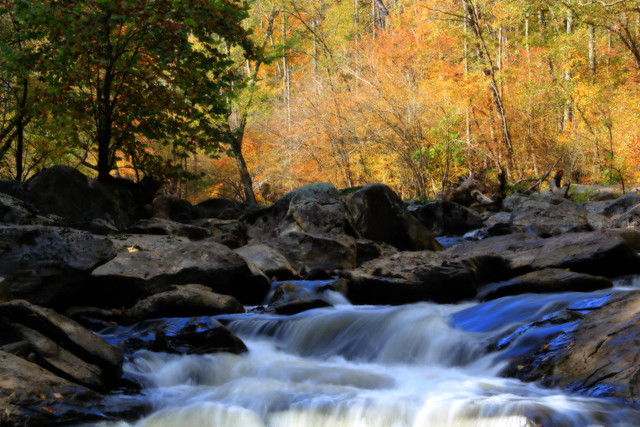 Difficult Run in the Fall 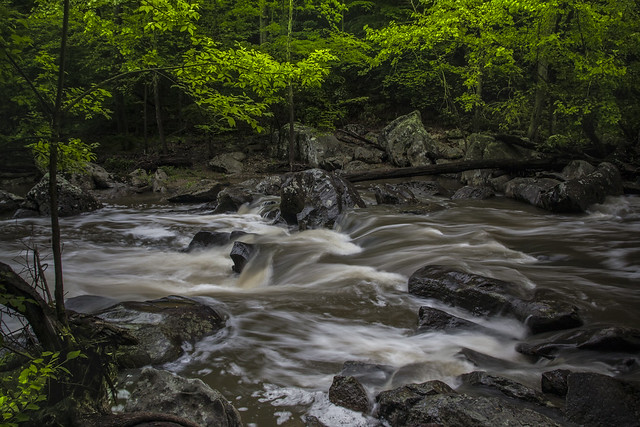 Difficult Run in the Spring

My son and I headed out yesterday to hike through the mud. It was all worth it because even with no leaves on the trees the sights were still incredible. As you walk down the path you’ll come to cascade after cascade. And I guess one section isn’t technically a “waterfall” but it is the size of many.  There are also a lot of places where you can crawl out onto the rocks and get very near the running rapids and it is pretty exciting. 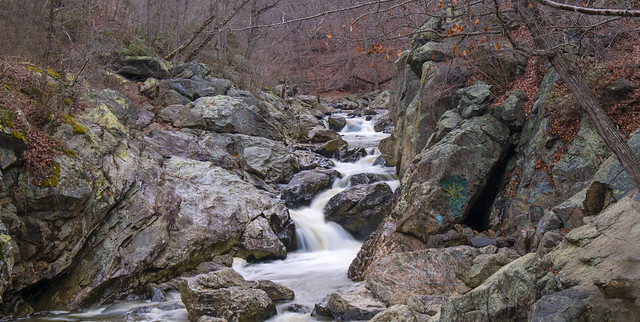 Looking Up the Gorge

There is a place on the trail where it cuts off to Ridge Trail to the left. This trail will take you to Great Falls National Park. We didn’t go that way yesterday as my son had fallen and cut his leg open on a rock. He had kept going after I bandaged it (always carry a first aid kit!) but I knew he was hurting. However, the views are spectacular and worth a hike. 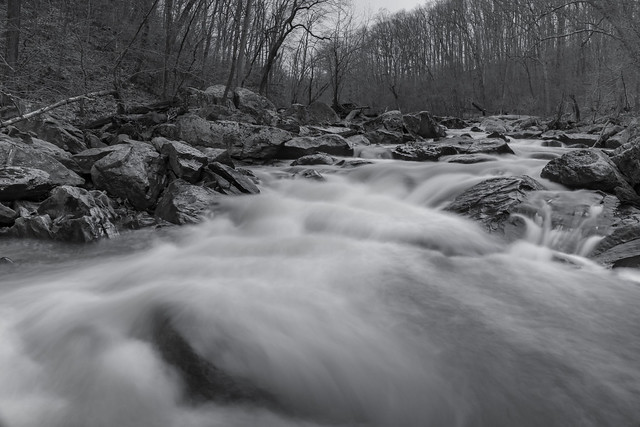 Close to the Rapids

Instead of going left, we took a right and headed down to get close to the rapids. Even with high water there are great locations to set up a camera and grab long exposures. Or just look at how the water creates the gorge. You won’t be disappointed. 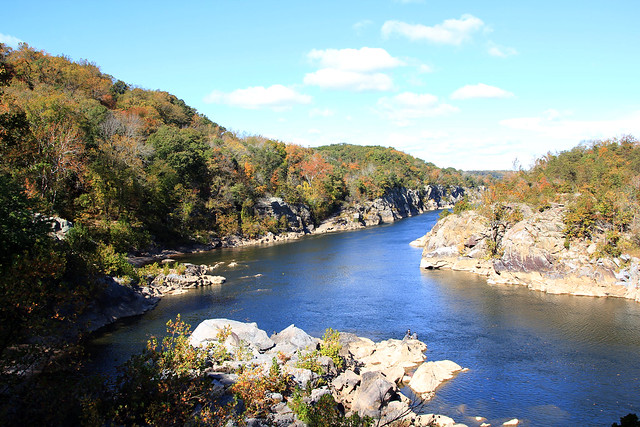 Heading Towards Great Falls in Autumn

It was a short trip but enjoyable. I never get tired of photographing this area and am already excited for spring.