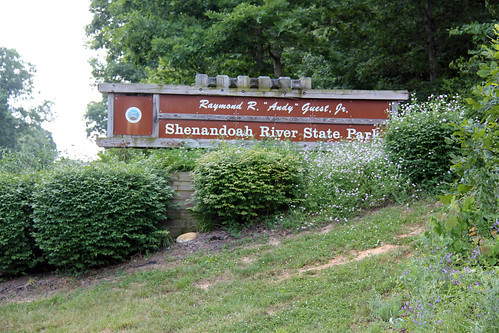 I think that Virginia State Parks does a fantastic job of advertising their parks and the events happening at all of them. I was excited when I saw a notice for tubing at Shenandoah River State Park. I knew it was going to be a hot weekend and it seemed like something my son would love. I consulted with him and he agreed. I hadn’t ever been to this state park so I was excited to mark another one off of the list. To go tubing you must make reservations with Virginia Canopy Tours that is located right inside the park. It was pretty inexpensive considering you could take as long as you wanted to float down the river and they provided the transportation to the starting location, the life jackets, and the tube. We arrived to the park plenty early and stopped at an overlook. It was a beautiful view down into the valley and of the river. 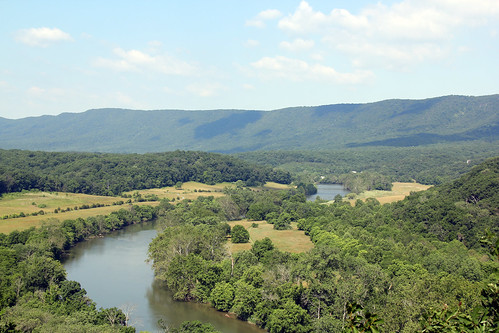 My son saw a path just below the overlook so he took off running. I often wonder if you’ll turn out to be a trail runner or an ultra runner because he loves running down trails. He always says he hates running but he sure loved it that day. We didn’t go far down the trail because we had the appointment for tubing. I wish we could have though because it was really pretty. 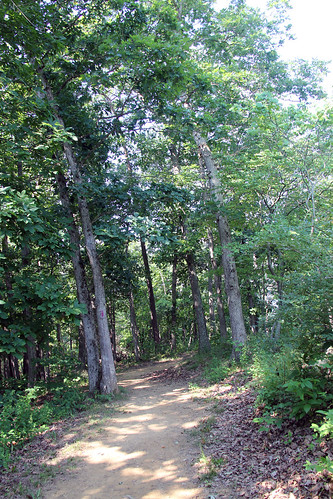 We return to the car and headed to the Canopy Tours office. We checked in and watched the short safety video and waited for the others to arrive. There were only five of us who had registered so off we went on the little bus. The other three had decided to walk a bit farther up the river to have a longer tubing ride while we decided to just hop in at the drop-off location. Neither of us had been tubing and I think we were both a little worried.  I knew I’d get thirsty so I had brought my Teton Sports hydration pack with me (dumb idea but more on that in a minute). It also served as a way for me to take my phone so I could take pictures. 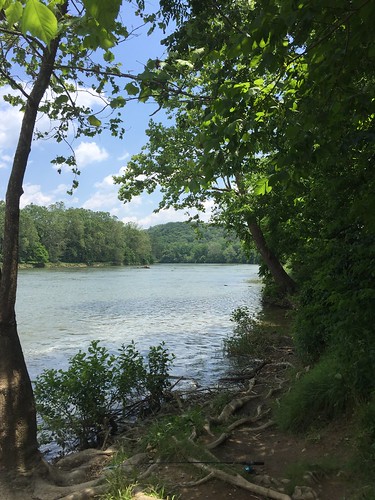 The beginning of our trip was a bit scary. The river seems very shallow – we could see the bottom for most of the time. However, I floated must faster than my son. I was getting pretty far ahead of him and he wanted me to wait. The only way I could do that was to get off of the tube and try to stop myself. Unfortunately, I stopped in a location where the water was deeper – up to my neck – and I went faster because I was in a strong current. I was attempting to hold onto my hydration pack, the tube, and not let my shoes fall off. Finally, I was able to stop myself and wait for my son. Whew. We decided at that point to hold onto each other’s tubes.

From that point, the trip was pretty fun. My son hated that dragon flies kept landing on him. They obviously don’t bite but he’s not a “I love bugs” sort of boy. Also, we got attacked by a butterfly. Seriously. It wouldn’t stop flying in our faces for some reason. At that point, we decided to disconnect. My son was confident and the river had really gotten shallow so I knew I could stop if I had to. By this point the other three people had caught up to us. Adults really fly down the river compared to kids. 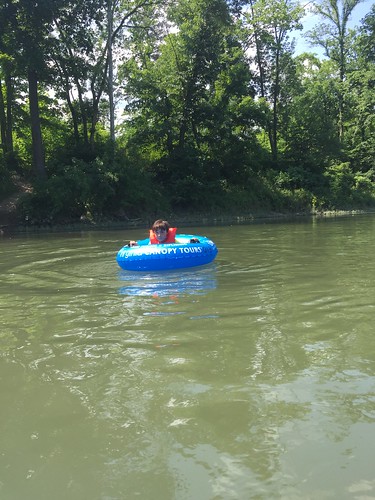 My biggest concern throughout the whole trip was to not float under trees near the banks of the river. Growing up I did quite a bit of canoeing and I know that spiders often hanging down and that’s just not good for me. Finally, I saw the sign where we were supposed to end our trip. This was the most difficult part of the journey. There were “rapids” at this location and it was difficult to maneuver over to the side of the river. It was too shallow to let my legs hang down through the tube so I had to kind of walk it over there. Eventually, my son caught up and I grabbed him from the river. We spent some time at that location just sitting in the water. My son had fun picking up large rocks and throwing them back down or skipping them. This was a popular place for others to come and take a dip as well. You could walk to the top part of the “rapids” and then let it carry you down which was pretty fun. When you’re done tubing and enjoying the river you take your tubes up to a small bus and throw them in the back of it. Then you can take the short walk back up to the office and retrieve your keys and anything else you may have left. I think the next time we go I’ll definitely just leave my phone and not take it with me. It was fun to take pictures while we were tubing but now that I have some I won’t need more.

The park isn’t very large. It has numerous picnic tables and places for camping and staying in cabins. The cabins area is pretty nice and they looked similar to the ones we stayed in at Hungry Mother State Park. There were a lot of people there enjoying lunch. We had planned on doing a hike but we were tired and ready to go home. I would definitely recommend the tubing trip. You can also do a Zip Line tour that costs $89 and takes 2-3 hours to complete. My son is excited to try that next time we go. To see more photos please visit my Flickr Page.

The area known as “Algonkian” in Loudoun County is one of my favorite places to visit. I’ve written about it before and have an album dedicated to it. There are numerous trails to pick from and all of them are special.

Someone I follow on Instagram posted photos from the Algonkian Nature Preserve. I kept thinking she was in one area of the park but as it turns out there is a whole section dedicated to the preserve. The trail I ran on all last fall passes a playground and I would stop at the playground for Spartan Training. I had never noticed that the path kept going and boy did I miss out. I was excited to go and stay on the trail this time. 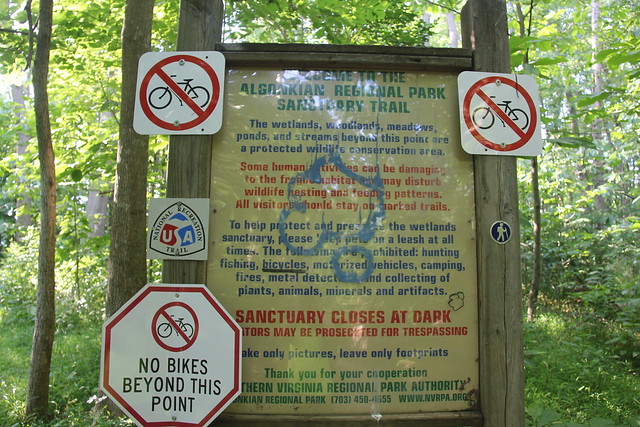 I finally reached the Preserve. What a special parcel of land. It is very marshy and swampy and they have done a beautiful job of creating the trails. In fact, the evening I was there, a man was out weed-whacking the trail. I thanked him for volunteering to do that and was amazing at how much he had done (a half a mile at the very least).

I spent a lot of time just exploring and waiting. I was hoping to see some wildlife – anything. While I did see some squirrels and a turtle I didn’t get to see any beavers or wild turkeys. I was also on the lookout for birds. I did see some cardinals and blue birds but nothing bigger than that. While I didn’t see any mammals or birds I did see nature in all its glory. 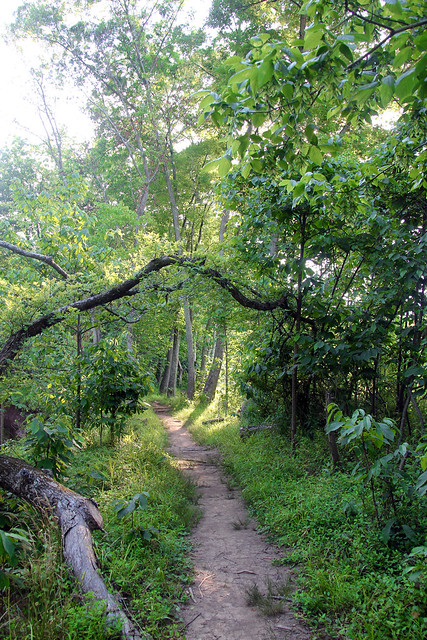 The trails (as I mentioned above) are very well maintained. They are wide which makes it nice when others are running or passing by. There are also a lot of great trees. I saw one that was just huge (my photo didn’t do it justice) and some that were just interesting. I took a photo of the one pictured below because it was unique in how the branches grew in comparison to all the other trees. 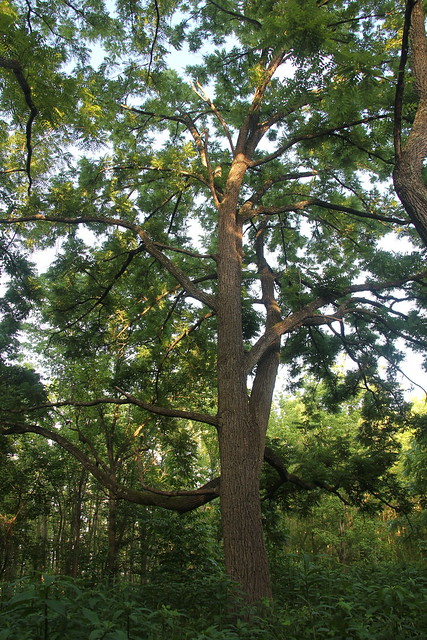 As the path winds its way to the Potomac River you will happen upon a picnic table. The location was just so pretty. And as you look out over the water you see a variety of floating docks with grills on them. Yes, grills. I didn’t see anyone using them but it seems like a fun idea. 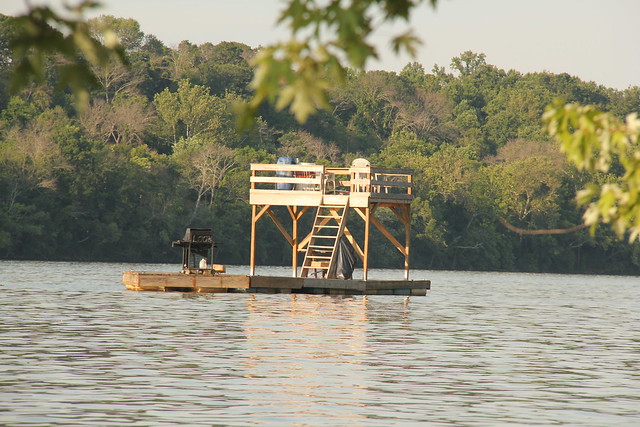 The sun had started to set as I was leaving. I wanted to stay for the full sunset but I hadn’t been feeling well and thought I should get home. I definitely want to return for a sunrise and a sunset. I saw plans from 2015 for a boardwalk out into the marsh area. I don’t know what happened to that because I definitely didn’t see one anywhere. I think that would be a fantastic idea. The marsh area in my hometown has one and it is a fantastic way to view swampy area. 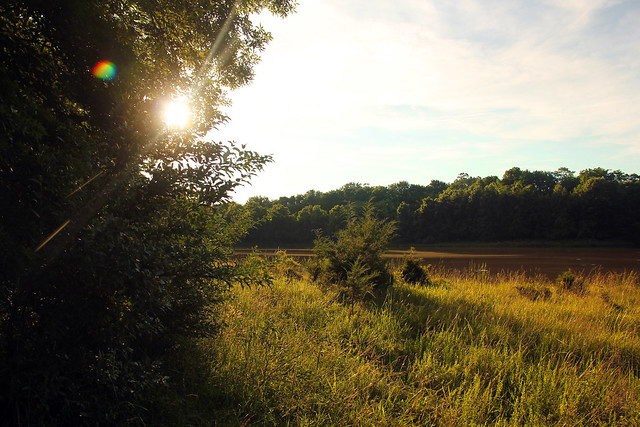 I definitely will be heading back here often. The Nature Preserve is a great place for walks, hiking or trail running (very flat).

And just like that, the Maah Daah Hey Trail in North Dakota is on my list. I was reading an article on Outside Online that talked about this trail. I hadn’t heard of it before but it seems fascinating. So often I desire to hike where I can take in a view or a mountain. If you’ve been to North Dakota before you know that there are not mountains like you would see in the Rockies, Smokey Mountains or even my Shenandoahs. The highest peak is just 1,056.

I remember a bit about having been in North Dakota when I was little. I remember the wide open spaces. I remember the prairie dogs. I remember bits and pieces of other things and those memories combined with reading about this trail has moved this to higher on my list.

I haven’t ever been backpacking with a tent. I’ve been backpacking and stayed in hostiles in New Hampshire on the Appalachian Trail. I think I could maybe take on that adventure for this trail. The campgrounds are 18 miles apart so you’d really need to plan ahead and make sure you had water and were in shape enough to reach the campsites before dark.

I imagine that hiking in wide open spaces could make one feel like they aren’t getting anywhere fast. I think I would love it – especially during sunrise / sunsets.

My hiking list is very long. Someday I’ll actually knock one or two off of that list.